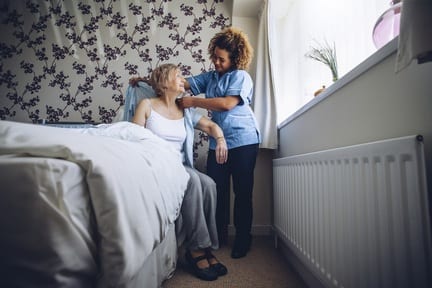 We have an experienced team that works on refurbishment projects for the care sector and this article from Care Home looks like an interesting move.

A care home group in the southwest of England has revealed that it took the decision to ditch uniforms for staff, due to concerns they were causing divisions between the care staff and the residents.

Whether to wear uniforms or not is often a contentious issue for care homes, with some feeling uniforms give staff a professional image and can help residents to identify staff. However, others feel a non-uniform approach makes the environment more homely and relaxing.

A spokesperson for Evolve Care Group said: “We decided it was a good idea because it was in line with our Household Model of Care and would help minimise the institutionalisation.”

The Household Model of Care is designed to be a ‘true continuation of home’ where care is tailored around the individual and independence and choice are encouraged, with the day decided by the resident’s mood.

“We announced to our care teams across the company, that they no longer needed to wear a uniform. By and large, the teams were delighted, but a few carers argued against it. One said that she thought that uniforms were important because they were respected, and it simplified identifying senior carers.”

Health care assistant, Rose Pearce, from the group’s Gibraltar Nursing Home in Monmouth, said visitors needed to quickly identify who they could talk to about important care issues and wanted to keep the wearing of uniforms.

Since the scrapping of uniforms, she has changed her mind. “It’s not often that I admit that I was wrong, but I was,” she said. Within the first few weeks, she began to notice the people she cared for, who are referred to as family members by the care teams, started commenting on the clothes she and the other team members wore to work. Nobody had ever commented on the uniforms before, but since the change, they were regularly hearing comments such as “I love that top” and “that colour really suits you, dear.”

“Being able to choose what to wear for work also meant that staff were able to choose clothes to wear that would be more likely to generate a positive reaction, such as wearing a particular football top when working with a family member who supported that team, or wearing a T-shirt with a picture of a horse, and asking if anyone had ever been horse riding.

“Communication levels between carer and cared for, increased, as did the level of wellbeing. Although uniforms made it easier to recognise care staff, this was primarily benefitting visitors to the home. For the family members, especially if they were living with dementia, seeing a uniform was not something they were used to seeing in their own homes and could increase levels of anxiety.

“Also, from the care teams’ point of view, uniforms could be uncomfortable and poorly designed, or cheaply made. It also seemed that some people had an antipathy towards uniforms. This may have its roots in our history of associating them with war or the emergency services or even school bullies,” added Evolve’s spokesperson.

Nocturnally, the care teams are encouraged to wear night attire, such as dressing gowns and pyjamas, so as not to confuse people with dementia and help them differentiate between day and night.

Evolve’s policy change has won favour with the Care Quality Commission which found that no uniforms promoted an “inclusive family environment” and minimised confusion for people living with dementia.